In our previous post, we discussed NPR science journalist Richard Harris’s general critique of animal research in his book Rigor Mortis, but there is more to be said.  If animal models are imperfect, Harris asks, why not “simply” try to find replacements (p. 82)?  Replacement of animal studies with alternative methods has been a hot topic in biomedical research since the “Three Rs” (replacement, reduction, and refinement) were promulgated by Russell and Burch in 1959.[1]  Consideration of the Three Rs has undoubtedly benefitted a great many laboratory animals and yet progress in replacement seems agonizingly slow.  The Interagency Coordinating Committee on the Validation of Alternative Methods (ICCVAM) was established by the US Government in 2000 to evaluate alternatives to methods animal research and testing, based on earlier initiatives dating to the early 1990s.  While there have been some successes, notably in routine acute ophthalmic and dermatologic testing, it remains a piecemeal approach with no general solutions found.  The reason for this is not hard to seek:  it is difficult to emulate the many complex systems and interactions of a live animal.

There is considerable excitement about so-called “organ-on-a-chip” technology, in which cells are cultured using microfluidic technology in such a way as to mimic specific tissues and organs.  Harris discusses one of the more advanced approaches, that of the Boston start-up Emulate (pp. 84-87).  Ultimately, it is proposed to combine systems to form a “human-on-a-chip,” which is envisioned as a replacement for animal studies.  A clear advantage for such systems is that they utilize human cells, and conceivably could be developed to use the cells of an individual human, to represent that particular patient.  But can organ chips really represent actual organs?  Lung tissue, for example, contains at least ten different cell types.  While such systems certainly have some advantages, we find it ironic that the reason Harris and others are interested in them is that animals are “not just small furry humans.”  Indeed not, nor are humans just large microfluidic cell cultures in plastic.  There are approximately 80 human organs, organized into twelve or so systems, all under complex neural and hormonal control.  And animal models, imperfect as they are, have a more or less complete set.  We predict that organ chips will become tools to supplement animal studies rather than replacements, as has proven to be the case for DNA chips, which were also touted as replacements not so long ago.

In our next post, we will discuss some of the sources of error 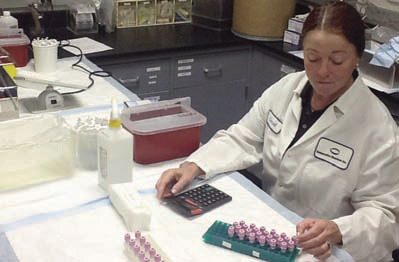 Carol Meschter, DVM, PhD, DACVP is a founder of Comparative Biosciences, Inc. She is an experienced board-certified veterinary pathologist with expertise in toxicology and animal models. She has over 100 publications and is a reviewer for several major journals. She is a scientific editorial reviewer for Toxicologic Pathology, Veterinary Pathology, AVMA Journal, AJVR, J Applied Immunology, and has over 100 publications.