Abstract: Streptozotocin-induced hyperglycemia resulted in changes in the retinal pigmented layer consisting of increased thickness of the middle retinal layers, increased new vessel formation, reactive endothelium, dilated capillaries distended with either blood or edema fluid, acute inflammation composed of intravascular neutrophils, and neutrophils adhered to vessel walls and extra vascularly at 4 weeks post STZ treatment. Additionally, there were neutrophils free in the retina and vitreous and there was some fibrinous debris in the vitreous. Occasional necrolytic debris was also present in the retina. These changes were clearly evident histologically and were supported by Optimized Computer Tomography and retinal angiography. Examination of the retina via fluorescein angiographs using a Phoenix Research Labs Micron III retinal scanner, revealed marked increases in retinal vascularity in streptozotocin-treated rats with areas of leakage particularly surrounding the optic nerve. These changes were compatible with and correlated with the histopathologic findings of increased vascularity of the retinal pigmented layer. The Phoenix Research Labs Micron III retinal scanner is a suitable and appropriate device for assessment of retinal changes in STZ-hyperglycemic rats. Further, OCT was conducted pre-study and at regular intervals, clearly demonstrating thickening of the retina, primarily the middle layers following STZ induction. Treatment with triamcinolone significantly reduced STZ-induced retinal thickness as well as other ocular changes. Both the Phoenix Micron III scanner and Bioptigen (Bioptigen, Durham, NC, Bioptigen Envisu R-Class system) OCT machine allowed for multiple, detailed, long-term noninvasive retinal-vascular assessments in life in a scientifically accurate, efficient and cost-effective manner.

Introduction: Diabetes is associated with retinal microvascular changes that include leakage, increased neovascularity, and increased tortuosity, as well as neutrophil attachment and leukostasis. The streptozotocin (STZ)- induced model of diabetes in rats serves as a validated and reproducible model of retinal hypervascularity in Brown Norway rats. Body weights and blood glucose levels were monitored weekly. At two and four weeks, retinas were examined using the Micron III retinal scanner (Phoenix Research Labs, Pleasanton, CA). Optimized Computer Tomography (Bioptigen Envisu R-Class System, Bioptigen, Durham, NC) for preclinical research) determinations were performed pre-study, at several time points and prior to necropsy. Histologic examination of the eyes was also performed. In-vivo fluorescein angiography as displayed by the Micron III and OCT coupled with histopathologic assessment of the vasculature of the retinal pigmented layer allows for a complete assessment of microvascular retinal effects in this model. All in vivo experiments were conducted in accordance with the ARVO Statement for the Use of Animals in Ophthalmic and Vision Research and the guidelines established by the Animal Care Committee at Comparative Biosciences, Inc, an AAALAC accredited facility. 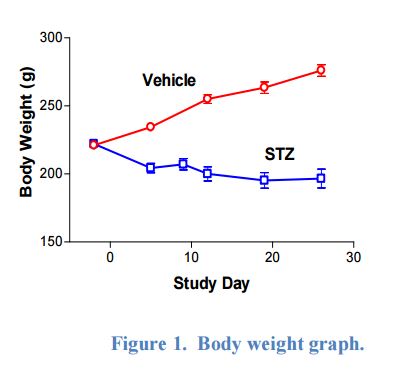 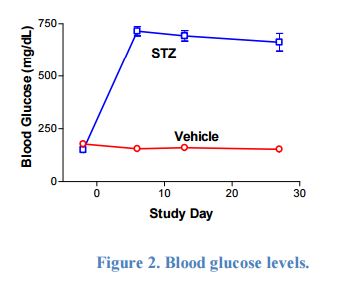 Retinal Imaging: Retinal imaging was performed on Days 14 and 28. Fluorescein dye was administered intravenously and optical density staining was visualized using the Phoenix Research Labs Micron III retinal scanner (Figure 3), including the recording of ~45 sec/animal of high-definition digital video. Videos of the retina immediately after fluorescein dye injection were made.

Selected images from the resulting Week-4 videos were used to quantify the amount of dye leakage from retinal vessels in STZ vs. control animals. Retinal findings may be summarized as follows:

Necropsy: For each animal, both eyes (with optic nerve attached) were collected and fixed overnight in modified Davidson’s solution and then transferred to 10% neutral buffered formalin. Following processing, tissues were dehydrated, embedded sagittally in paraffin and serially sectioned (at 3-5 µm) through the center portion of the eye, including the retina-optic nerve region.

Histopathologic Findings: Lesions from both eyes for each animal from both groups were evaluated via light microscopy by an ACVP board-certified veterinary pathologist. Representative sections of untreated and treated retinas were assessed. Vascular lesions in the retinal pigmented layer were scored 0-4 (0= no lesion present; 1 = minimal; 2 = mild; 3 = moderate; 4 = severe) and included vascular dilation, leakage and inflammation. These results are summarized in Table 1.

Untreated eyes were within normal limits. In the STZ-treated rats, there was increased new vessel formation, reactive endothelium, dilated capillaries distended with either blood or edema fluid, acute inflammation composed of intravascular neutrophils, neutrophils adhered to vessel walls and extravascularly. Additionally, there were neutrophils free in the retina and vitreous, and there was some fibrinous debris in the vitreous. Occasional necrolytic debris was also present in the retina. While lesions were present in all animals, there was considerable variation in severity of the lesions. Vascular lesions corresponded with the retinal scans. In Group 1 capillaries were clearly visible and there was no tortuosity or evidence of leakage, while in the STZ-treated groups, vascular tortuosity and vascular leakage was clearly present. The histologic scores are summarized in Table 1.

Histomorphometry: Histomorphometic analysis of angiograms at 2 and 4 weeks to assess vascular changes was conducted using color phase analysis employing the MicroSuite Five (Software for imaging application). Areas of interest were photographed and then analyzed. The affected areas between untreated and STZ-treated eyes were compared at 2 and 4 weeks. In the untreated animals, there were minimal areas in which there appeared to be vascular effects. In STZ-treated animals, there were large affected areas constituting about 10-12% in comparison to the untreated animals (2-3%). This is approximately a 3-4 fold increase in vascularity and leakage in STZ-treated rats in comparison to untreated rats. These results are summarized in Table 2.

Conclusion: At CBI, our STZ-induced model of hyperglycemia in Brown Norway rats is associated with consistent, reproducible long term hyperglycemia, weight loss and retinal changes including increased thickness of the middle retinal layers (outer plexiform layer and outer nuclear layer), increased vascularity, leucostasis, and mild inflammation. These parameters may be modulated and reduced following administration of the positive control drug, triamcinolone. This model and our assessment parameters are ideal for the evaluation of new drug entities for the treatment of this important disorder for which there is no treatment. Our assessments include histology, fluorescein angiography with the Micron III and OCT with the Bioptigen Envisu R-Class System to provide a comprehensive and in depth assessment of test article effects in this model of diabetes. These scanners allows for multiple, detailed, long-term noninvasive retinal-vascular assessments in life in a scientifically accurate, efficient and cost effective manner.

OCT was used to measure the thickness of the various layers of the retina. OCT is a noninvasive measurement of the retinal layers that facilitates longitudinal, real time and repetitive tracking of ocular changes, in particular changes in retinal thickness. subretinal injections, stem cell implants, intraocular implants, retinal changes, and tumors. The assessment reveals or detects subtle retinal or ocular changes that are not visible with slit lamp biomicroscopy or funduscopy. 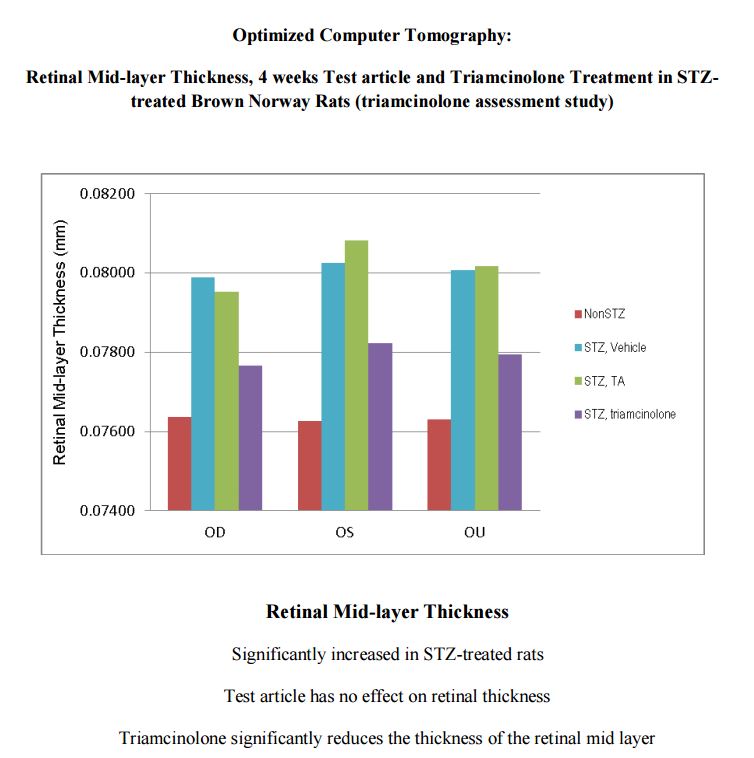 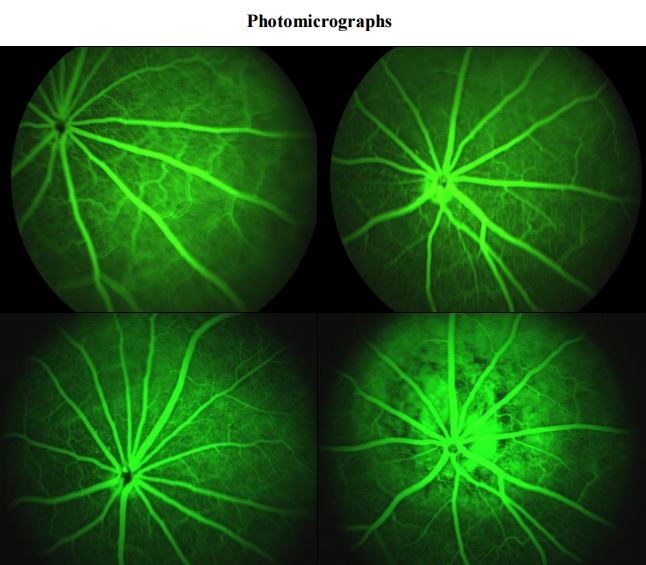 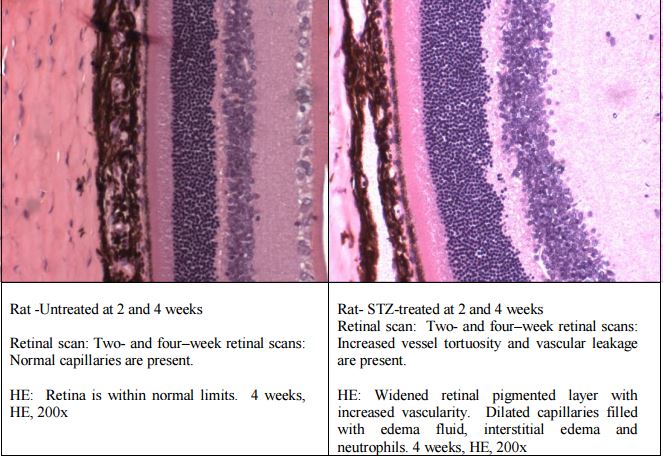 Have a question or need a quote?